The First World Problems of Being a Mac Pro Owner

So I’m doing some housekeeping in DEVONthink, and it’s in the process of indexing and creating thumbnails for a folder I just relocated and want to re-index.

And I watch the progress bar move along at this leisurely pace, and then I go and check out DEVONthink’s CPU usage, and it’s sitting here politely sipping at my CPU as it gently moves through the work it has to do: 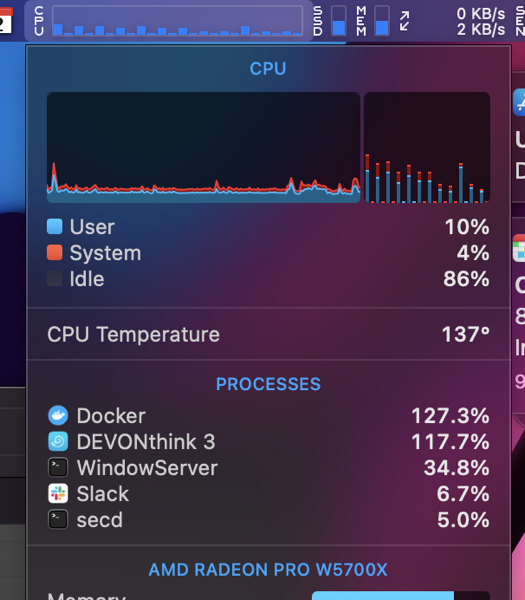 I want you to pound these CPUs.

I did not spend ten freaking grand on Apple’s highest end computer for you to try to be polite about resource use. I’m not on a laptop here.

I appreciate you being polite, but look at Docker over there! I’m not even using any containers right now and Docker is happy to consume even more processor cycles than you! And even Slack is putting in a good effort while not even being visible on screen.

Tear through these files, please! Use up the memory! I have almost 100 gigs of it just sitting right here. There’s 45 gigs not even being used right now! Come on, what are you waiting for?

I share a little bit of the bitterness that visiting space has transitioned from being something that countries did, to being a hobby of wealthy people with the funds to end world hunger but instead are like “nah, I want to spend billions on a rocket to send me up into space for a couple minutes.”

Of course, it’s important to watch for those rose colored glasses. Space exploration holds a special place in the heart of many a nerdy type (myself included), and indeed those who were around to see us set foot on the moon remember it as a point of national pride.

Of course, our interest in going to space was mostly a glorified dick measuring contest with the Soviets, and the nobility of our exploration kind of got retconned in there after the fact. And when the narrative we were taught in grade school was being put together, the history lessons left out the fact that it was a number of brilliant black women like Katherine Johnson who were performing important calculations to support NASA’s mission, even though they were treated like second class citizens and their work went unacknowledged for decades.

Exploring space is a worthwhile endeavor, and humankind should be doing it. It’s not inherently bad for someone to be really rich and have the cash to go into space for fun. It will never stop being sad to me that we culturally have set up capitalism so that it is wants so badly for billionaires to be able to exist and go on these adventures that we insist on letting people go without homes, healthcare, and food, and we do it largely on the principle that we want billionaires to become billionaires.

Comment
I finally finished the last episodes of The NewsroomÂ recently, and itÂ got me thinking and worrying about the future of journalism. I know a lot of old guard organizations that did great work are dying a slow death into irrelevance, and thatâ€™s sad. I see hope in a lot of new organizations popping up doing great journalism in a digital age (Vice and Salon come to mind), but I canâ€™t help but feel like weâ€™re still seeing a net loss. Although new tools make the barrier to getting into doing journalismÂ a lot smaller, we are losing the quality of journalism that comes from great big organizations with a lot of resources to do great news for us.Â
Â
But man, for an industry that needs all the money it can get, I am amazed at the sheer awfulness of the news products these companies are putting out. The experience is so user-hostile.
Â
Â
I want:
Â
In short, I want to read the fucking news.
Â
Sometimes i like to listen to the news, and I think podcasts (which, like Dan Benjamin, I like to just refer to as internet radio)Â are the future of audio news updates.Â I also like weekly shows like Last Week Tonight (which admittedly pushes the limits of being able to call itself a legitimate news show but theyâ€™re doing good work). And Iâ€™m willing to pay more for podcasts and video formatted newsÂ shows. ButÂ ultimately the coreÂ experience I demand as a news consumer is to read the news.Â
Â
Thatâ€™s really all I want. Iâ€™m happy to pay something like $50 a year from multiple organizationsÂ for news like this. And this format doesnâ€™t have to be just for news news. I would love to see The OnionÂ offer something like this (especially The Onion; their sponsored content is getting obnoxious). Ars Technica Premier offers something very much like this.Â
Â
Being able to pay $50 a year for news is a privilege, though, and I agree that those who canâ€™t spend that kind of money should still have access to the news. I canâ€™t name a specific model for non-paying users that would be successful. Maybe free users would see tasteful, non-obtrusive banner ads (though I really hate the idea of a readerâ€™s eyeballs being treated as currency), and the free RSS feed would not have full articles.Â
Â
Maybe Iâ€™m just an old geezer whoÂ is still clinging onto RSS, but it truly is the best tool for those who want to keep up with news from many sources. RSS respects you as a reader. It puts you inÂ control of what you see. ItÂ doesnâ€™t let you be tracked with cookies. ItÂ is super flexible.Â
|  rant

Everywhere you read about technology, the chief complaint about AT&T seems to be its dropped calls in big cities. Â And while that’s a very valid complaint and all, AT&T has a much bigger problem on their hands.

Ask any AT&T rep about their 3G coverage, and one who is well-versed in bull-shittery will quickly point out that AT&T’s 3G network reaches 75-80% of the US population. Â Wow, you think. Â That’s pretty reasonable.

Unfortunately, that’s just a really flattering interpretation of a pretty lousy 3G footprint. Â Much of the US is crammed into some super densely populated areas, so you can reach 75% of the US population without covering much land. Â And maybe if you live in a large city that is blanketed in AT&T 3G, it’s not a big deal to you that 3G isn’t available out of your bubble.

But that’s not really something you can do with AT&T, because they just don’t put forth the effort.

But to AT&T, this is acceptable. Â After all, why put the money into an area that isn’t very densely populated? Â After all, it doesn’t give you much of a return, so why bother having it there for customers to use?

Again, it all comes back to the promise of a nationwide network. Â When you’re paying your bill, you’re not just paying for infrastructure in the area your billing address is. Â You are paying for a network to be there when you happen to be on this random road and you break down. Â You’re paying to have service to make calls when you’re staying at a friend’s house in some podunk town.

For sure, AT&T needs to address the issues in its big cities. Â And they can afford to do so, because they have a lot of subscribers per square mile. Â But they also need to start taking more rural areas seriously. Â Even EDGE coverage is acceptable here (though they could put up 3G towers and make a handsome profit selling internet service to people out in the country), but there needs to be some coverage. Â Verizon has AT&T beat by a long shot, and their network is 3G across the board. And if AT&T wants to keep customers like me, they’re going to have to put forth the infrastructure, or I’m leaving in 2012 when Verizon LTE iPhones are available.