You take one look at the Mac Pro and you just know it means business.

It’s not the most Mac-like of the Macs out there by any means. The essence of the Mac as a piece of hardware has always been that of an all-in-one computer, and so if you are looking for a computer that is a true spiritual successor to the original Macintosh, get yourself an iMac.

Not long after the 128k Mac made its debut, there were users who saw how powerful the Mac system software was as a platform and wanted more out of their Macs, and Apple soon started to serve that market with workstation-grade machines that would easily set you back thousands (in 80s dollars).

When I first got this computer, before I even set it up, the first thing I did was open up the case and look inside. 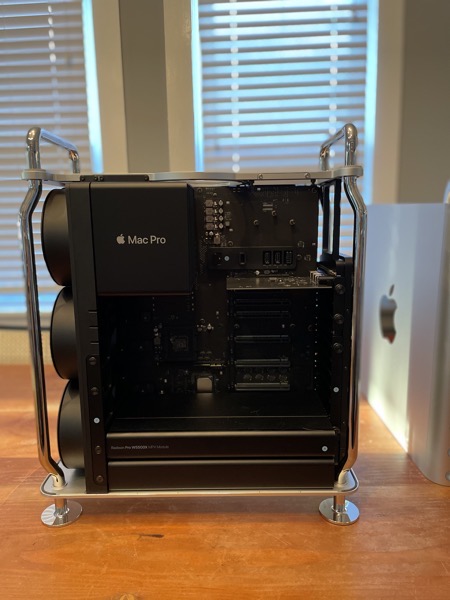 Ordinary Macs don’t want you opening them up. Apple famously designed the original Macintosh so that you needed special tools to open the case. The Mac Pro practically dares you to open it, with a simple handle on top that you pull up and turn 90 degrees, then pull the top case off. The computer is as beautiful on the inside as it is on the outside.

This sucker is equipped with just shy of 100 gigs of memory (or, as Google Chrome refers to 96 gigs, “about enough”), and it’s rocking a midrange 12-core Xeon processor (which offers you a good compromise between single-core performance and total multi-core processing power). The fans are barely audible at any given time, even with sustained 100% CPU load. Although inaudible, the fans are indeed working to move heat away from the components, as evidenced by my office now being a good 5 degrees warmer than the rest of the house.

If I described my day-to-day workload out loud, it wouldn’t sound worthy of a machine this expensive. But I am a very demanding user of my Macs, and if you see how they act after a couple years of me using them, they start to show signs of age. They will start locking up at inappropriate times, or I’ll see some kernel panics I used to not see. Disk I/O might start acting up after I worked the SSD pretty hard.

I’m not pushing my computers to their limits 100% of the time, but my Macs work hard for me, and the Mac Pro is the first computer I’ve ever owned that truly feels like it can keep up with me, and I don’t ever feel like I’m overworking it.

And although my workloads don’t look like the archetypical kinds of workloads you might see Mac Pro advertised for, my work style takes a computer that isn’t a slouch. Right now I’ve got two massive 5K monitors connected, with the slightly upscaled resolution (because I like my screen real estate). I’ve got 30 apps open right now in my dock. I’ll routinely be running some development environments which involves running app and database servers, maybe some Docker containers as well, and I’ll have at least one Chromium instance running (Chrome, and it’ll usually have several windows open, each with at least a half dozen tabs) and often at least one or two more (probably Slack or GitHub Desktop). I’ll have an email app open checking emails in the background, an RSS reader sitting off to the side, and a Twitter client always at the ready if I’m waiting for tests to run and I need to kill a minute, or if I have a hot take.

If I ever need some validation that this wasn’t a frivolous purchase, all I have to do is plug my laptop into these two monitors, and start using it the way I use the Mac Pro. The laptop’s fans will get quite loud, and switching between apps and general UI responsiveness will be laggy. Something simple like bring a window into focus might take upwards of a second depending on how busy the laptop is. On my Mac Pro? It’s almost always instant.

If I wanted just raw speed with a bunch of memory I probably could have gotten by with an iMac Pro (recently discontinued), or even a more recent iMac. But I absolutely love the flexibility the Mac Pro offers me. Sure, I don’t get the flexibility of working on my couch or on the porch, but I love knowing that it’s got a number of expansion slots available as I want to push it more. 100 gigs might sound like a lot of memory but I have quite a bit of headroom before I’m even close to the 768 gigs this particular model of machine allows. The SSDs on this computer have read and write speeds of something like 3.4 gigabytes per second of I/O performance, but if I want even more, I can stick some SSDs on a PCIe card and double that (and I am tempted to if not for the presumable complexities of software RAID).

There are few people as irrational as I am about getting the fastest computer possible; and I don’t personally know… any. I know of a few podcasters that bought this machine, and I know some famous YouTubers use it because the Mac Pro’s performance characteristics has a pretty big impact on their video editing workflows, but nobody I know was foolhardy enough to drop their hard earned money on one of these. Even more foolish, I knew in late 2019 that Apple was transitioning off of Intel macs, and soon. If I was just willing to wait a couple more years I probably could have just gotten the first Mac Pro made with Apple’s new chips. But this computer will carry me all the way through that transition, and I wanted to show Apple that there are still computer enthusiasts that want a computer like this, and I’m willing to use my dollars to show them that.

A tower Mac like this used to be pretty common. A lot of people who needed a Mac professionally to get serious work done needed the kind of power that only a tower Mac could provide, and indeed in the 90s and early 2000s a tower Mac was a common occurrence (and one could be had for a far more reasonable 2–3 grand). But computers got faster. Laptops got more popular and better. Nowadays the workstation just isn’t needed like it used to be. You can be a pretty demanding user and be perfectly well-served by just about any computer Apple makes. The workstation is a more niche category than it’s ever been.

But the workstation isn’t going away. Some people still need and demand a computer with the thermal capacity and expandability that you can only get with a tower. Apple thought we were leaving that age when they released the 2013 “trash can” Mac Pro, but the truth is that we will never leave that age, because there are always going to be some pro users who just need a big machine that you can either push to its absolute limits for sustained periods of time, who need to stuff the machine full of extra expansion cards, or both.

And those people should be Mac users, because there is no better OS for doing work like this.

And even though I did struggle with a months-long ordeal of trying to figure out some graphics related issues (spoiler: the Radeon Pro 580x drivers for macOS have a really annoying bug), I absolutely love this machine. It is the embodiment of performance and modularity at any cost (emphasis on the “at any cost” part).