Maybe it’s a part of growing up, but I just no longer have the interest in arguing about certain things I used to love debating/arguing about at length (i.e. OS X’s superiority to other operating systems). Â It is with a little bit of this wisdom that I see a little bit of myself in ZJEmptv on YouTube, a.k.a. Zinnia Jones, the “Queen of Atheism” (note: ZJ is actually a guy, and no, he isn’t trans, though given his look, he’s happy with being referred to as “he” or “she” and I may mix genders of pronouns in this post as it feels right).

(UPDATE Feb 2013: ZJ actually did come out as trans since I wrote this. Keeping gender pronouns as they were for posterity) 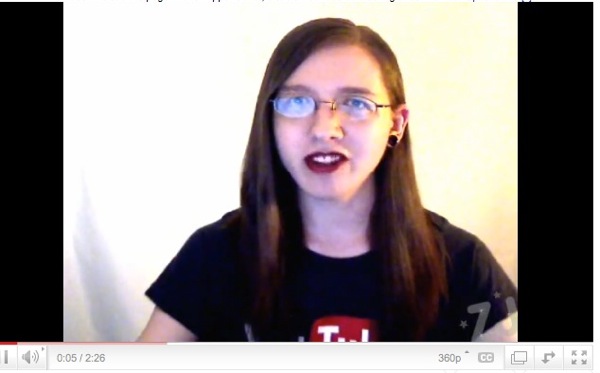 ZJ covers a wide variety of topics, but her two biggest topics are queer-related topics, and topics related to atheism. Â In the earlier videos, you’ll find a spunky teenager with unkempt hair with a bad attitude telling you about his dick (seriously), but there’s been a gradual transition to longer, better kept hair, some makeup wearing, and sadly, her videos are now very monotone; in a quest for better eloquence, she’s now writing out her video transcripts and reading off of them. Â It feels lacking in emotion and unhuman, but they’re her videos, not mine, and I won’t judge.

In any case, despite being a high school dropout and never having gone to college, ZJ is a fantastic debater, carefully picking apart opponents’ arguments and meticulously destroying them. Â ZJ is also no slouch academically, usually being quite knowledgeable about any subject he tackles (now I feel sexist, referring to ZJ as a boy when talking about his intelligence, but referring to her as a girl when talking about how her videos are robotic sounding… my bad) and being generally very well-informed.

To me it feels like such a waste of greatness to see him on YouTube. Â Have you ever read YouTube comments? Â I usually think twice before posting one myself, because I don’t feel idiotic enough to belong in the ranks of the people who leave the worthless drivel they call comments. Â And here ZJ is trying to win people over to atheism (an evangelical atheist?).

ZJ, this post is for you, and I’m giving you this advice out of pure admiration. Â If you’ll forgive the irony, you’re preaching to the choir. Â The religious people you try to reason with are not going to be convinced to abandon religion after seeing reason, and if they do, they’ll get there on their own. Â People don’t become religious because their minds followed a soundly logical path. Â Most of them just had it presented to them as fact at a very young age, and went with it. Â Others are looking for something to follow. Â Whatever the case, people who are sticking with religion are not doing so because it’s the logical thing to do. Â They’re doing it because they’re putting blind faith in the belief system, and the belief system was cleverly constructed to “reward” you for your blind faith. Â With an ingenious system like that, no number of YouTube videos will win people over. Â They’ll have to see it and realize it for themselves, just as you did at one point.

In addition to the frustration, there are the true dangers of religion, which you point out. Â Humans are very prone to following authority, and you start to find that religious people become okay with genocide under the right circumstances (remember what other group of people became okay with genocide?). Â Religious people become complacent about child abuse under the right circumstances. Â Religious people make the connection that the war the US is in is somehow its punishment for not treating gay people badly enough. Â It’s enough to make you want to curl up in a ball, repeating to yourself “this isn’t the world I want to live in.”

So what do we do to spread the good word of atheism? Â Well, if I was convinced that you could convince people out of religion by the logical reasoning you use in your videos (even if it was just a few people), I’d say keep doing that. Â But as I said, if someone’s smart enough to connect the dots, they’re going to do it with or without your help. Â But look at the trends. Â The US is getting more secular with each generation, and despite religious people’s fighting, religious faiths are dying down. Â Religion is fading away, albeit at a pretty slow pace, and people are going to start treating each other better because of it. Â We have to push for better educations for people, and to equip people mentally with the bullshit detectors that will eventually go off one day when they’re sitting in church. Â We have to come out of the closet (I know, we did that once already, isn’t that enough?) as atheists. Â As more and more people start identifying publicly as nonreligious, people will start to realize that nonreligious people aren’t the savages religion makes them out to be.

So, ZJ, in conclusion, I love your spirit and your intelligence. Â Use those in a way to make a difference; to enjoy your own life and enjoy the mental freedom you get as an atheist who rejects gender boundaries. Â And I’d love to hear your take on my thoughts here, too. Â You always do have a way with breaking apart arguments. Â And if I don’t see a video or blog post about this, I’ll safely assume you couldn’t find flaws in my logic and I’ll assume I’m right.

EDIT: ZJ did respond quite promptly.

And here’s the video:

I think some very fine points are made by him. Â Certainly there is something to be gained through a healthy debate or discussion. Â My jadedness comes from seeing ZJ trying to reason with people who are either clearly idiots (like the kind you see holding up misspelled signs at Tea Party rallies) or they have some intelligence, and they try to come off as being really smart but end up throwing in a bunch of gaping logical fallacies.

For further irony, I often live by the serenity prayer in that sense, in that I’ve learned to have the serenity to accept the things I cannot change (i.e. people who are trollishly religious on YouTube), the courage to change the things I can (working to make the world a better place), and the wisdom to know the difference (rules like “if it’s a YouTube comment and it’s a large run on sentence with no punctuation marks involved at all, ignore”).

Thanks, ZJ, for your quick comment, and if there is a response, I look forward to watching/reading.