The Moonlander: 1 Year In

I’ve been using ZSA’s Moonlander keyboard as my daily driver for just over a year now. Now that I’ve had the keyboard for awhile I wanted to share some deeper insights than the first impressions I shared last year.

Layout-wise, the Moonlander is similar to an Ergodox keyboard. It has two halves, the keys are in a grid-like layout instead of a staggered layout, and each half features a cluster of keys meant to be hit by the thumb. The Moonlander builds on that basic design with much more ambitious industrial design, a built-in wrist rest, and a hinge for the thumb cluster to help the keyboard accommodate a variety of heights.

And let’s be honest here: this thing was a thing of beauty out of the box. Its aesthetic give me somewhat of a Starfleet vibe if you’re a Trekkie: 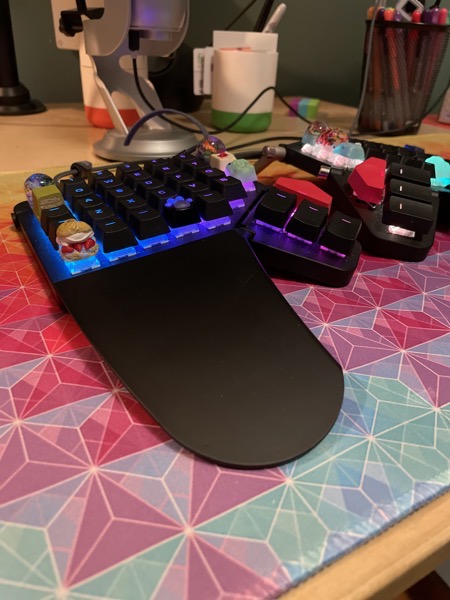 I started using mechanical keyboards in 2012, but it wasn’t until about 2019 that I finally ventured away from keyboards with a more or less standard layout. I would see people’s Ergodoxes and Plancks and such on Reddit and it piqued my curiosity, but it felt like it wasn’t for me, largely because I’d have to un-learn years of keyboard shortcuts and conventions.

I did initially buy an Infinity Ergodox kit, but I never quite adjusted to it. It was in kind of an uncanny valley, where its size made it feel almost like a tenkeyless keyboard, but my pinkies wouldn’t stop reaching for an Enter key that no longer was there, and symbols like [ and ] I couldn’t get the hang of (which is unfortunate for a programmer like me).

Turns out, my solution was to get a keyboard with even fewer keys: I got the Planck.

The Planck was easy for me to learn. It’s just 48 keys (47 if you get the double-width spacebar). From home row I can move a finger one up and I’m on the top row of the keyboard. I can move a pinky one to the right or left and I’m at the edge of the keyboard. Every key was easily within reach. With fewer keys, my fingers didn’t get lost as much and I got up to proficient speeds in a week or two. Not only was I proficient, I really grew to love the layout! When you’re typing on one you feel this Zen feeling because your fingers are flying but your hands are perfectly still.

So when I got my Moonlander and was deciding how to set it up, I had a great realization: it essentially contains a full Planck keyboard inside of it. 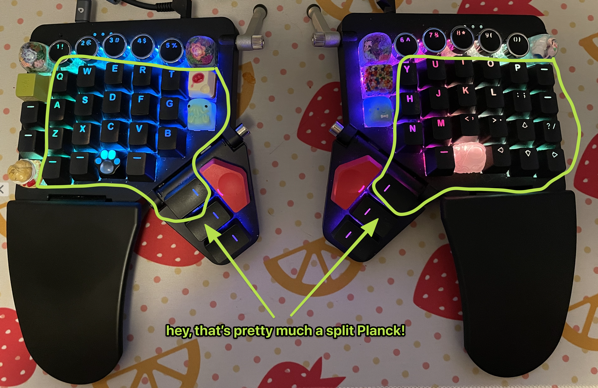 So my Moonlander layout is unconventional: it’s a Planck layout at its core, but with extra keys on the outskirts.

If you have a Moonlander and want to try my layout:

I didn’t yet know what I wanted to do with the extra keys initially. I allowed the top row to be a number row, but pretty quickly I was finding that the number keys got in my way; I’d reach up to hit the Q and I’d overreach and hit the 1. The thumb cluster keys are pretty good at staying out of the way, but I struggled a little with those two columns of keys closest to the middle. Initially I didn’t give them a function.

Frustrated with my number row of keys, I decided to just take the keys out altogether since the switches are hot swappable. 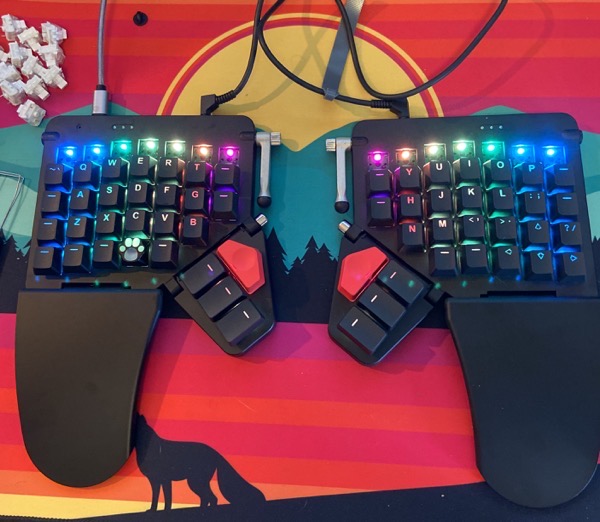 I iterated on this many times, but my middle keys now serve a mix of functions. I’ve got one that gives me the backtick key, a /, a ?, and a couple that are macros for keyboard shortcuts. Two of them I still don’t have programmed for anything in particular.

That still didn’t solve the fact that the keys felt ambiguous to my fingers. However, it was around this time that I was starting to really get into novelty keycaps, which solve the issue perfectly: they are sculpted, so each key cap feels different to my finger and thus is easy for me to tell apart from regular keys:

On the thumb cluster, I’m doing a few interesting things. On the left, the furthest key lets me cycle through windows using the cmd-backtick keyboard shortcut. The same key on the right invokes 1Password. By far the most common thumb cluster keys I use are the ones closest to the bottom row, and I use those as if they’re just part of the bottom row; they’re my spacebar and my Return key.

Eventually, I got sick of getting blinded by empty key sockets on the top row. If ZSA sold a Moonlander that was identical to this one but missing the top row I’d buy that in a heartbeat. For awhile I put back the number keys but I again had the issue of bumping them accidentally. Then I had a clever idea: I bought some round typewriter-style key caps from AliExpress. Between their different shape and their significantly higher profile, I never accidentally bump them. And as a bonus: they’re there as number keys which is handy if I need to hit a number or two quick and I don’t want to bother with layer keys. 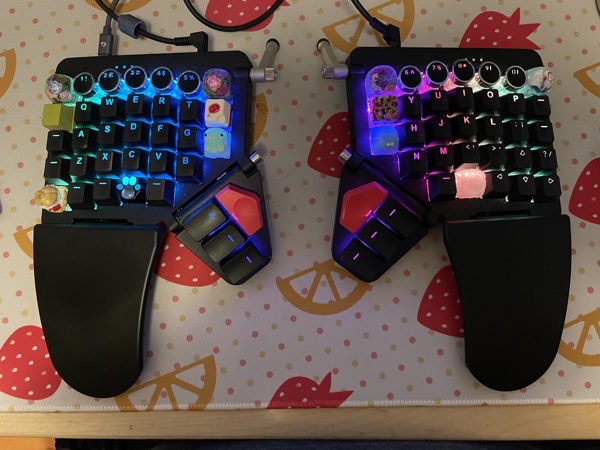 I think it looks really sharp.

I ordered this keyboard with Kailh Box White switches, which are clicky like Cherry MX Blue switches, but with a more premium and rich feel. However, I immediately found myself accidentally making keystrokes with my sausage fingers. To address this issue, I bought some stiffer springs and swapped them all out. This has worked great and the switches feel just perfect now, and they sound lovely.

Aside from the occasional week where I’ll swap out with a Planck, the Moonlander has quickly become my daily driver keyboard. Considering how many keyboards I actually own, the fact that this has become my default over 80% of the time is really saying something. It’s deeply comfortable to use and has a really premium feel to it. The other 20% of the time I’ll stick a Planck keyboard on my desk and use that, or maybe one of my Nyquist keyboards which are like a Planck but split into two halves.

My key caps are quite a ragtag team of misfits, but they are highly practical, and I do have enough other novelties that I do rotate these out.

I want to emphasize just how many keyboards I own (there are over a dozen just in my office, plus even more in my basement, which doesn’t even include a couple that I haven’t built yet). I have my pick of keyboards here, and almost every day I pick the Moonlander to drive with. It’s that good of a keyboard.