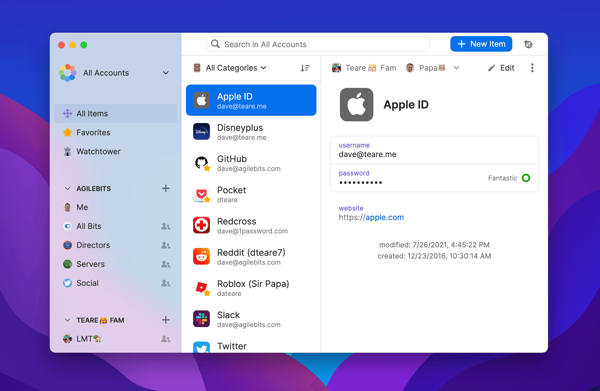 It’s no longer a native Mac app; it uses Electron instead.

I strongly dislike Electron apps. Developers love making apps with Electron, mostly because it’s a lot less effort and you can use familiar web technologies to make desktop apps. But for all the reasons it’s great for the developer, it’s worse for users, because although you technically can get a macOS app with Electron, your app isn’t a macOS app; it’s a web app that’s wrapped in Electron.

You can build really impressive apps with Electron (because the web is a great platform), but it takes a lot of effort to build an Electron app that is truly a good citizen that fits in on every platform. And because the Mac platform is such a well-made platform with great attention to detail, Mac users snub their nose at Electron apps more than most.

That’s probably why 1Password decided to so heavily dance around the subject.

I’m trying out the app now. They clearly tried hard to style the app to look Mac-like, but no amount of styling is going to make it feel Mac-like, and indeed it doesn’t take long to start noticing the shortcomings. When you scroll through lists in an AppKit app, it’s buttery smooth. Scroll through lists in the new 1Password app and it drops frames on a Mac Pro. Drag the scroll bar and the items just won’t render while scrolling until you slow down. When you get to the end of a list in an AppKit app there’s a little “rubber band” effect with the scrolling; do the same in Electron 1Password and it’s flat and lifeless. The preferences panel was implemented as a modal that can’t be dragged. The Delete key doesn’t… actually delete things (though that one’s probably just an oversight that will be fixed).

They bragged a lot about how it’s using a new Rust backend (which is great) but it’s only after some prodding that they admit (in their forums) that it’s an Electron app behind the scenes.

Although I can appreciate their desire to maintain fewer codebases, this move really seems to scream “we’re a VC-backed company now!”, and I do appreciate the irony that 1Password has made native Mac apps for over a decade, but now that they’re backed by millions in VC funding, they can no longer afford to write native apps for multiple platforms.

And I get why. These investors poured millions into the company and are going to want to see growth, and that will only come when 1Password starts piling in new features at breakneck speed. They need a single platform to target so they can keep up. Never mind that in the year of our lord 2021 1Password still is hit-and-miss in terms of actually being able to fill in my password on every web site, and when it comes to auto filling account sign-up forms it’s more miss than hit; after all, core features aren’t getting 1Password any new customers; it’s all about the new features!

But if the new Electron app was truly one to be proud of, 1Password shouldn’t have had any trouble shouting it from the rooftops. So either 1Password knows Electron is worse in a lot of ways so they’re trying to downplay that part of it, or they do think it’s a great app but they don’t have enough respect for their users to be honest about it.