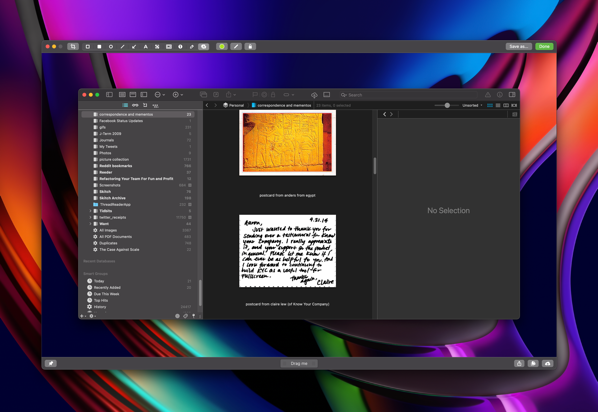 When macOS Mojave introduced an overhaul to their screenshots feature to make it similar to how iOS does screenshots, I was really excited initially and pretty quickly gave up on it; it’s weird to use and doesn’t really support drag and drop.

Last year I stumbled across CleanShot X, which is like if Skitch and the macOS screenshot feature had a baby.

I always loved how Skitch made it easy to quickly mark up a screenshot and then drag and drop it somewhere with a prominent handle on the window. I was initially excited when Evernote bought Skitch then brought it into the Evernote fold, but years of neglect and poor performance soured me to it.

CleanShot works beautifully, and I have it saving screenshots into a folder in Dropbox, making it easy to share an HTTP link to the file. I then index these screenshots in DEVONthink, giving me a rough equivalent to Skitch’s Evernote-integrated features, but since each component is a best of breed tool, they all work seamlessly together and everything is fast.

CleanShot doesn’t just stop with screenshots; you can also do simple screen recordings that can be MP4 files or gifs.

I take screenshots probably about a dozen times a day on a given work day and CleanShot is just perfect.