Because I love Alfred so darn much, Iâ€™m giving away Alfred Powerpack licenses to some lucky readers. If you want to enter, you should own a Mac, since youâ€™ll need one to actually use Alfred!

To enter, do one of the following:

If you also mention one of these posts on Twitter or Mastodon or Micro.blog and mention me youâ€™ll double your chances.

I like to watch experienced craftspeople do woodworking from time to time, and the more I watch good ones doing their work, the more I realize it has a lot in common with software development as a craft.

One such similarity is that woodworkers will often see opportunities to make themselves more productive by building little custom tools for themselves such as jigs to help hold a piece of wood in place, or to help make consistent cuts when doing some repetitive work.

Hereâ€™s a common enough use case: I have a projects folder where I keep all my programming projects. I very commonly want to just open one of the folders in that projects folder with my editor of choice.

Alone, Alfred makes this not too difficult:

But we can do it faster with a workflow.

This workflow has two components: a script filter input and an action that runs a script.

This is the script filter: 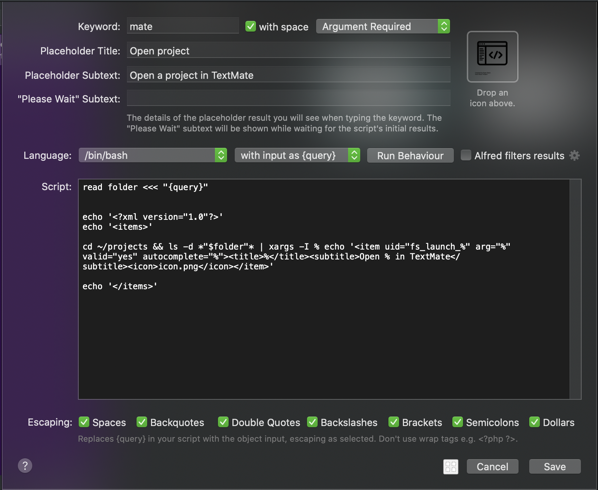 The code for the script filter:

Iâ€™m not that good at Bash scripting and I lifted this code from some other Alfred workflow years ago. But to customize it, youâ€™ll want to change the directory where it says cd ~/projects to match the directory you keep your projects in. You can also customize the text to say whichever editor you plan to have projects open in.

The script reads simply /usr/local/bin/mate ~/projects/{query}. Your editor will be a different binary. If you use VS Code and youâ€™ve set it up to launch from the command line the path to the binary will be /usr/local/bin/code instead.

With everything set up, letâ€™s see how it looks: