Since I was diagnosed with diabetes a few years ago, one of my best coping mechanisms has been to lean into it by using it as an excuse to play around with gadgets to track it.

And lest you think that’s a waste of time, it’s really effective! There is a direct relationship between how well controlled my diabetes is and how much I’m tinkering around with this stuff.

One of the most powerful tools in my diabetes management arsenal is a system called the FreeStyle Libre. Instead of having to prick my finger every time I want to check my blood sugar, I instead will insert a sensor onto my arm every two weeks, and whenever I want to check my blood sugar I can scan the sensor by swiping my reader next to it. Or if I don’t have my reader with me, the sensor uses NFC so my iPhone can scan it too.

But the LibreLink app sucks. It isn’t a particularly good iOS citizen; instead, it feels like it’s just trying to mimic the reader’s own interface. And despite having this treasure trove of data, it won’t sync to HealthKit. You have to use a proprietary app called LibreView (although through a series of steps I can export the data and eventually get it into the Health app).

Basically, there are two extra features I wanted for my Libre sensor:

Because the Libre sensor is NFC based, I would need something extra if I wanted to actually push data from the sensor to my iPhone/Watch.

And there does exist such a device called the MiaoMiao. It piggybacks on top of your Libre sensor and connects to your phone via Bluetooth, scanning the sensor every five minutes via NFC and pushing the data over to your phone.

There are multiple apps that work with MiaoMiao, and on iOS you can use either Spike or Tomato. After unsuccessfully trying to get the Spike app set up and realizing it was kind of a lousy iOS app, I opted to try Tomato, which is at least in the App Store.

The Tomato app works, but it is kind of a low-quality Chinese made app with the trappings you might expect from such an app–poor translations, a UI that lacks care, mandatory login with your Google, Facebook or WeChat account (Sign in with Apple was strangely absent despite supposedly being mandatory via App Store policy) and Watch complications that either truncate your data, or make really poor use of space. 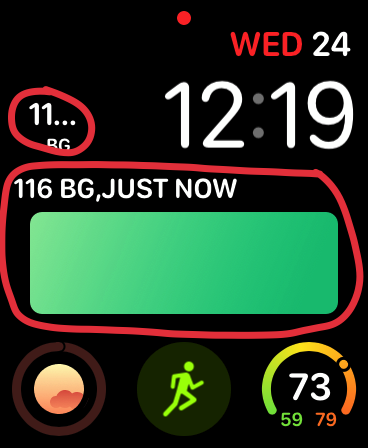 However, the app does sync with HealthKit, if you have a premium subscription (interestingly, it doesn’t use Apple’s in-app purchase mechanism either; they prompt you for PayPal. I have no idea how Apple approved that as that is a blatant violation of App Store policy and usually the kind of thing Apple watches like a hawk).

So instead of using Tomato’s own watch complication, I am instead using HealthFace to set up a complication for my watch that displays the most recent blood glucose value. 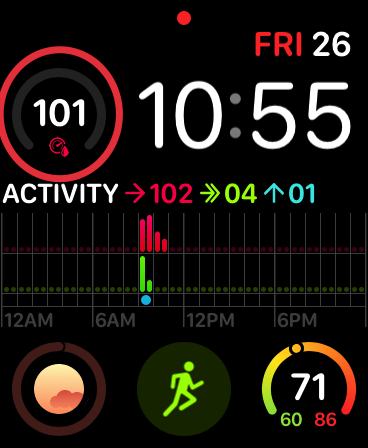 Ideally I’d like the HealthFace app to be able to display a chart of the last few hours of values so I have some sense of my glucose trend, but now that I have the watch complication I am watching its value often enough that I have a mental idea of how it looks anyway.

Some random facts that I wondered that aren’t answered elsewhere:

As appreciative as I am that all these parts can work together like Lego pieces to give me a working solution, I’m still a little frustrated that Abbott doesn’t provide a decent end-to-end solution.

In Europe there is a new version of FreeStyle Libre with sensors that are Bluetooth-enabled, but the sensor only uses Bluetooth to alert you of highs or lows, and doesn’t push the actual glucose data to your reader, so that’s still a dead end.

But at some level this neglect is a blessing. Abbott’s not offering anything like a full SDK or anything for its sensors, but they’re straightforward enough to reverse engineer that we can at least cobble together our own solutions.