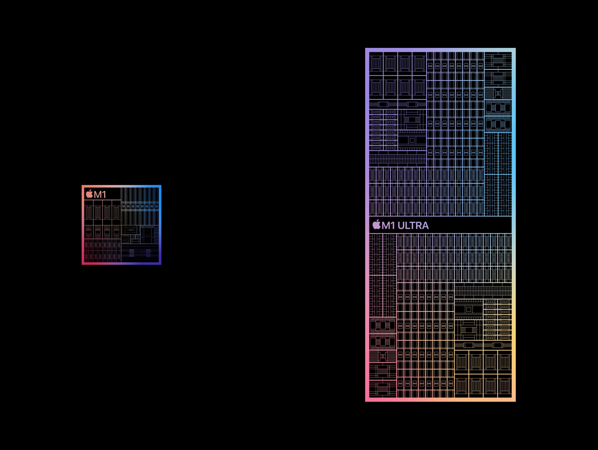 Apple announced a handful of new products at today’s event, including a revamped iPad Air, a revamped iPhone SE, and a brand new Mac called the Mac Studio, along with a companion Studio Display.

All of these products are great, but the Mac lineup so far is left with these super strange gaps now.

All of the Apple Silicon chips for Macs have thus far been based on just one system on a chip. The M1 chip is a variant of the A12 chip found in the iPhone 12, and this chip went into Apple’s first Apple Silicon Macs, the MacBook Air, the 13" MacBook Pro, and the Mac Mini.

Now, the M1 chip is great in these machines, but for the higher end stuff we need more power. Rather than designing separate chips for all these different use cases, Apple made the clever move of essentially gluing a bunch of M1 chips together into bigger chips that have more cores and memory and memory bandwidth. This approach is referred to as a chiplet approach.

This is really economical for a lot of reasons. First off, it saves a fortune on chip design because you’re really just designing one system on a chip. Also, making bigger chips is harder because not every chip comes off the wafer working at 100%. That means it’s harder to get these bigger chips because it requires that you have several chips adjacent to each other that are all good. But if you have one that’s bad, that’s okay, because if all the others are good, you can use those in cheaper machines, or even if you have a chip that’s good but one core is bad, you can deactivate that core and still get something for the chip.

Since most of the computer-y parts of the computer are on this chip, most things about Apple Silicon macs scale up with how big the chip is. That means that the M1 Pro supports double the memory of the M1 and has double the memory speed, the M1 Max doubles the M1 Pro’s, and the M1 Ultra doubles the M1 Max’s still (which really makes “Max” seem like a short sighted moniker for that chip).

Mac Pro: “That’s for another day”

After unveiling the M1 Ultra, John Ternus hinted that now just one Mac remains, the Mac Pro, and like a tease, he just said that’s for another day.

I’m most excited about is seeing how Apple plans to approach the Mac Pro with Apple silicon, because Apple’s going to have to approach that computer totally differently.

So far, everything Apple’s done has been predictable: they keep stacking up M1 chips in powers of 2, and the bigger chips go into the higher end machines.

And that scales up pretty well! If you take a doubled version of the M1 Ultra’s die, you end up with a machine that has a whopping 40 cores and 256 gigs of unified memory.

And that sounds like a lot, until I remind you that my puny little 12 core Mac Pro supports 3x as much memory as that, and the highest end Mac Pro supports a whopping 1.5 terabytes of RAM (which it doesn’t even have to share with GPUs).

Presumably, the Mac Pro will be a 2x version of the M1 Ultra, yes, but it’s going to need more than just unified memory to serve the pro users the Mac Pro is after. If Apple wants simplicity, they can make a Mac Pro that has this bigger chip, but also offers memory and PCI slots so you can add extra memory and GPUs. Maybe Apple will make some GPUs of their own design that you can install and have incredible performance. By default, these chips won’t be able to communicate with the CPU as fast as the memory and GPUs that are integrated, but I also wouldn’t be surprised to see Apple develop some sort of super fast interconnect that allows you to install more memory or more GPUs with very high bandwidth.

The Mac Lineup and its Gaps

Although John Ternus said that only one Mac product remains to be transitioned, in the meantime we have a very odd assortment of machines that have made the transition.

I was hoping to see a version of Mac Mini announced today that offered either M1 Pro or M1 Max processors (because I want a new Plex server machine), but instead we got the Mac Studio, which is a very high end version of the Mac Mini (and it’s big enough that it’s hard to call it “mini”).

But perhaps the most noticeable gap in the lineup now: large iMacs. Right now Apple offers a 24“ iMac that offers the M1 chip. But previously the iMac went as big as 27 inches, and for a time Apple even offered an iMac Pro that was their most powerful Mac for awhile. But for now at least, bigger and more powerful iMacs are absent from the lineup. Sure, you can buy a Mac Studio plus a 27” display, but in that case you’re looking at spending over 3 grand, whereas a 27" iMac could be had for under two grand in the past.

And these gaps are kind of unfortunate, because Apple has this processor architecture that scales beautifully from the tiniest Mac to some of the most powerful Macs available, and it would be simple to offer a variety of models to cover everyone’s needs.

I don’t think this gap is going to exist forever. Apple’s almost certainly making a bigger and more powerful iMac. I’m sure new models of Mac Mini will come out, and I also wouldn’t be surprised to see new Airs coming soon with the ability to have more than a max of 16 gigabytes of memory.

A year or two from now, I suspect the Mac lineup is going to have a steady progression from small and inexpensive to big and powerful, with plenty of options in between to accommodate every user.

I was so excited to see Apple enter the display market again in 2019 with their own display, until I realized that the display clearly wasn’t made with me in mind.

Since then, the rumor mill has been persistently stating that more consumer-grade Apple displays were coming, and I kept hoping we’d see something that offered the size and resolution of that beautiful 32" Pro Display XDR, but without the super expensive fancy features like the XDR support, and that included fancy things like a webcam (allegedly Apple didn’t put on in the Pro Display XDR because a lot of editing rooms don’t permit displays with cameras and that was a market they were targeting).

I’ve been sitting pretty with a pair of LG Ultrafine 5K displays for awhile now, but I’ve long been hoping to step up to something with more screen real estate. Apple’s new Studio Displays look really nice, but they are still the same resolution and size that has been available since the Retina iMac came out back in 2014.

Others complained on Twitter at a lack of things like ProMotion. I think ProMotion is great and I’ve been excited to see all Apple products get it since the iPad Pro added it, but I’m not sure ProMotion would necessarily even be feasible on a 5K display; the bandwidth needs would exceed what you could send over the Thunderbolt cable.

Apple’s approach to monitors in the last decade has stood out from the rest of the industry. Apple started putting Retina displays in Macs back in 2012 (and they put Retina resolution in a massive 27" display in 2014!) while the rest of the PC industry kind of just sticks it out with displays that are no bigger than 4K, mostly because gamers don’t want the extra resolution (it’s harder for their graphics cards to push that many pixels), and because most business customers just want to buy whatever’s cheapest that they can slap on people’s desks. This is largely why the LG Ultrafine displays have been virtually the only option for Mac users who wanted big external Retina-resolution displays. Apple tried to gently bow out of the monitor business in 2016 when they started making laptops with Thunderbolt 3 ports, but the industry didn’t follow with a plethora of high quality options. I’m really glad to see Apple own its own destiny again and make a display beautiful enough to go on my desk with my Mac.

I really was hoping to see Apple make something bigger and higher-res. I would have loved a 6K Studio display that was identical to the 27" Studio Display but just added a few extra inches, and I’d have been willing to part with a few grand to buy one (and let’s be realistic, probably two). I’ll continue to hold out hope.

I’m really delighted at all the new things announced today, but I am bummed that none of them quite match up with things I was hoping to be able to give Apple money for.

The transition to Apple Silicon has been really enjoyable to watch, and I continue to be happy that I’m watching it from a really powerful Mac Pro that has plenty of headroom before I’m going to be worried about it.