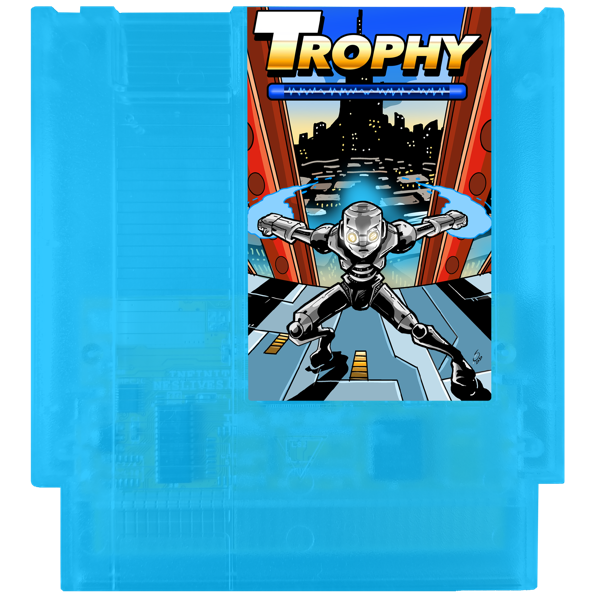 During the pandemic, I got a package from a Kickstarter I backed. It was a new video game made by an indie artist called Trophy. I held onto it, waiting to unbox it until after vaccines were widely available and I could go play it with a friend of mine.

The twist? This was a cartridge for the NES, Nintendo’s console that peaked in popularity in the late 80s.

This isn’t a review of Trophy, but it was an absolute delight to play. It was clearly designed by someone who loved the original Mega Man games, and retains similar mechanics and style. Levels are beautifully designed, each with distinct color palettes, and the game soundtrack is lovely.

It’s not uncommon for modern video games to take on a retro or 8-bit style in their graphics for nostalgia, but there are developers who are willing to take it a step further by actually going to build games for the classic hardware.

And there’s just something really cool about brand new games being released for 30+ year old systems.

For one thing, the games tend to be excellent. Systems like the NES are well-understood inside and out now, and developers can build games now that can eek every last bit of performance out of the console. Not only that, but with improved tooling, some solid games can be built with just a single developer (to make this same game in the ’80s would probably have required an order of magnitude more people). David Murray has been particularly prolific in this space, making games targeting Commodore, Apple and DOS systems. His latest game, PETSCII Robots, has wide compatibility and is probably one of the most sophisticated games out there for more primitive systems like the VIC–20 and the PET.

But the thing I love most about games like these is their almost subversive nature. These developers aren’t aiming to make millions of dollars selling these games; that’s nearly impossible given how few of these vintage computers are in use today. The games are here as a labor of love. And thanks to the limitations of the systems, these games are free of the douchebaggery common with modern games, like loot boxes and gambling-like mechanics meant to get you coming back every day to play the game. These games are simple, and their lack of sophisticated graphics demands that the focus be put into good game mechanics.

There’s something I find deeply refreshing about that, and I’m happy to support the makers of these games. @moshboy put it best: