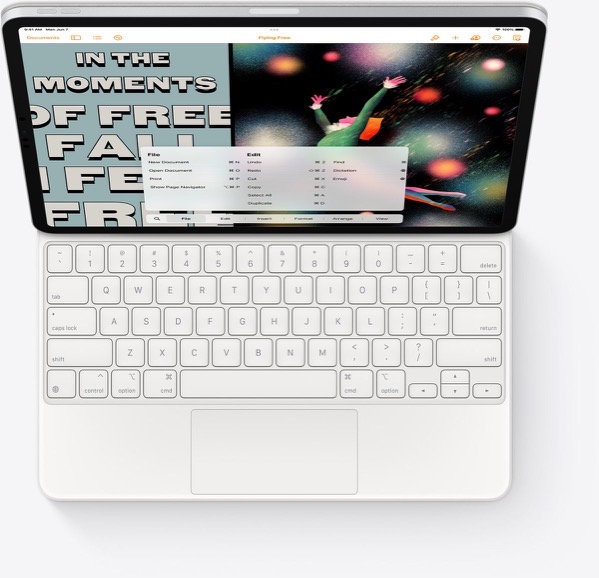 This keynote weighed in at just under an hour and 45 minutes, but by being pre-recorded, it was a tight keynote, jam packed with announcements.

I think my wish list was too highly focused on a couple small areas and not thinking broadly enough about the vast array of things Apple makes and could have added new features to. It probably is also a sign that I’m a little too focused on my own use cases and feature requests and not thinking quite enough of the big picture. Overall, 5 out of the 32 bullet points in my wish list were announced in the keynote (it’s possible a few other wishes came true but weren’t announced; I asked for a few bug fixes that I haven’t been able to test yet). However, there were a number of things announced that I didn’t know I wanted.

There wasn’t any! Developers are super eager for some so that’s a bummer, but also I’m guessing that these pro-level Apple Silicon chips are taking longer to get to market because they have really different characteristics from the M1 chip. It’ll need to support more RAM and larger SSDs for one, and also offer support for more high-speed ports.

Whenever Apple does release these higher end laptops, they’re going to sell like gangbusters.

I didn’t get the things I wanted most, which were a split view version of PIP instead of a floating PIP window, and revamped view of Messages app history (unless Apple silently made it work better and it didn’t get an announcement). Some changes were announced around showing things that were shared with you and surfacing them in other apps, but my much more common use case is one where my fiancÃ© tells me he shared a link with me two weeks ago, and I need to dig to find it because our message history is huge.

FaceTime is getting some welcome quality of life improvements. The spatial audio changes coming to FaceTime sound particularly Apple-like, and I have a feeling that when you hear a call with these audio improvements it’ll just have a certain je ne sais quoi that will lead people to just feel like the quality is better, even if the bitrate is the same. These are exactly the kinds of details Apple loves to obsess over, and it makes a difference.

FaceTime is also catching up to Zoom with a couple features like grid view, the ability to blur your background, and the ability to share links to a call. Also, it’ll finally be possible to have a FaceTime call with someone on a non-Apple platform.

One wish I didn’t expect to see fulfilled but it was: relay servers via iCloud+. That wish was really a long shot for me, but I think it’s a great feature for Apple to be offering. I’m also glad to see that iOS will show you exactly what domains your apps are talking to; it’s reminiscent of Little Snitch and I think it’s a tool with more teeth than just asking the app not to track you.

I was excited to see that you can now put your ID card into your Wallet app. Apple was pretty hush hush about which US states are supporting this, so I’m guessing the details are yet to be hashed out.

Support for unlocking your home’s doors looks exciting. I currently use a keypad but I’d love to see a world where I can swipe my Apple Watch or phone to the door to unlock.

The most important thing I wanted to see from iPadOS was for it to replace its current clunky multitasking model with a new one that is consistent, doesn’t require guessing, and where the various bits of functionality are composable with one another. Honestly, I think the end game for this will be for iPadOS to support app windows, but Apple apparently wasn’t willing to go quite so far this year. But they are making some nice improvements to the interface to using the existing multitasking support, and that is welcome. I find split screens to be really inflexible personally (it’s so annoying that if you have a split screen and you want a third app you literally have to cover one of the split screens up), but it’s something.

When iPadOS didn’t get widgets or App Library support last year, I assumed it was because Apple had something bigger in store for iPadOS. Turns out, they didn’t, and they just released those features a year late for iPad. Those should have been added in an iOS 14 point update.

The Files app and underlying APIs didn’t really get any mentions, but I hope they improved this year. The Files app is flirting with being completely unusable.

There was no word about multi-monitor support on iPadOS. I’m guessing we aren’t seeing this for the same reason iPadOS isn’t switching to full-blown windows as its multitasking modelâ€“it’s a lot of work to implement.

The least Apple could do is throw in Thunderbolt Target Display Mode on iPad so the Thunderbolt port doesn’t completely go to waste. I would love for my iPad to double as a high quality portable Thunderbolt display when I’m on the road, and Sidecar doesn’t cut it (seriously, for all the finicky things Apple goes to great lengths to get right, I can’t believe they are okay with the kinds of washed out colors and compression you get from having your Sidecar display be an H.265 stream).

iPadOS is a decade old now and frankly, it has little to show for it. Most of iPadOS is just riding on iOS’s coattails. Especially now that iPadOS is its own separate thing, I expect to see it make major progress each year to becoming its own computing platform. The first two years brought a handful of features each, and this year we’re getting something a little more substantial (and in total fairness Apple added cursor support last spring in a point update which was huge), but will we see another leap next year? In five years I hope to see iPadOS living up to the ambitions that the iPad’s hardware designers clearly have for it.

I’m not usually wanting for new watchOS features. I mostly just want every interaction on watchOS to become faster and I’d be happy (and I’m not sure if there are any improvements on that front but if there are, they weren’t mentioned).

I was particularly interested in the HomeKit doorbell integration. If I can’t get this working with my Ring doorbell via HomeBridge I can see myself trying out a competitor’s doorbell just for the ability to see a live video feed on my watch (and given that I used to work for Ring and love their products, that’s saying something).

In past WWDC keynotes macOS would be the first thing talked about so I had kind of forgotten about it when Craig brought it up near the end of the keynote.

Much like watchOS, with macOS I wasn’t expecting much. I really just wanted bug fixes more than anything (Big Sur left a lot of new bugs in its wake), but Apple had some surprises up its sleeve.

I have been pining for something like Universal Control lately. I used to use apps like Teleport and Synergy to be able to control other computers on my desk with a single mouse and keyboard, but Teleport got discontinued while Synergy’s developers seem not to give a crap about a usable UI. But Universal Control doesn’t just let me control two Macs with one keyboard and mouse at my desk, I can even control an iPad. That looked pretty awesome and it was a delightful surprise. Similarly delightful is the fact that Macs can now be an AirPlay target.

Automator is now retired and is being replaced by a macOS version of Shortcuts. I haven’t dug much into that but I’m hoping that it brings new capabilities. I’ve never found Automator style shortcuts to be that useful to me (and the same applies to the Shortcuts app on iOS; it’s always felt to me like die hard iOS users just make them because they can).

Safari on macOS got a really neat looking makeover! I keep finding myself on the verge of making Safari my main browser and I think it could happen one of these days.

I am particularly excited to hear that WebExtensions API extensions will be supported on all versions of Safari. Long term I look forward to a day when I can switch freely between browsers and not worry that I’m going to lose an essential extension. And given that Apple has formed a consortium with other browser vendors to move the WebExtensions API standard forward and ensure interoperability.

This keynote was a stark reminder of the sheer breadth of OSes and services Apple is actively managing. I didn’t even get into other stuff like Health app improvements or App Store changes. But also, the Venn diagram of my wish list versus what was announced was kind of odd to see; I’ve been focused lately on a lot of pain points and bugs because these are mature platforms and I mostly have the features I love, but I need them to be reliable.

As with last year, this year’s WWDC comes on the tail end of a lot of bad developer relations PR. I didn’t expect Apple to address that stuff head on; they always prefer to address that in WWDC by showing us all the cool stuff they’ve built for developers, but one slide stands out to me: the slide that says Apple has paid out $230 billion total to developers.

Setting aside that this also means developers paid Apple 30% of that over the years, that number bothers me because Apple just tries to show us that as a big number that’s supposed to amaze us, but $230 billion is the total amount of money Apple has paid out to all of the hundreds of thousands of developers since 2008, But in just the last three quarters, Apple took in $265 billion in revenue. I bet if you subtract out the money paid out to Candy Crush-type game developers for in-app purchases, the picture looks even bleaker. That size differential can’t possibly mean a healthy relationship between Apple and the developers dependent on Apple. And as Apple’s gotten bigger, growth has been getting harder and harder to find; Apple’s saturated the market with iPhones and other devices so we’re past the days of explosive hardware growth. And at Apple’s size, it has to grow revenue a ton just to keep the healthy growth percentages that investors expect. It’s pushed Apple in recent years into pursuing services revenue, which includes App Store revenues and other subscriptions Apple sells, and this Apple looks different.

Overall, though, these are going to be some great new OS releases this fall.