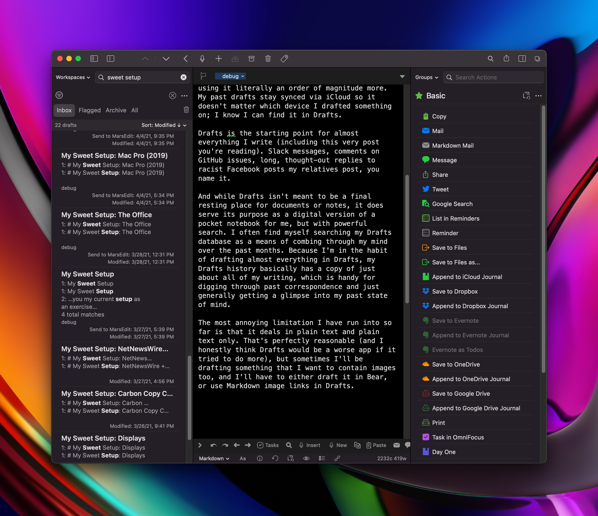 I didn’t realize there was a place in my life for an app like Drafts until after I learned of its existence. And while I’ve mostly focused on why I love the things in this series of posts, I think for Drafts I need to explain its whole deal.

Drafts started off as an iOS only app. The premise of Drafts is simple: you open it up to a blank screen that you can type text into, and it offers a very powerful interface for processing this text and sending it off to some destination app.

If I need to write something, I go straight to Drafts. No digging around for just the right app; I just open Drafts. Even if I know it’s going to be a text message or an email, I start off in Drafts anyway, because in Drafts I am free to edit and I am not afraid of accidentally sending the message first.

I used Drafts a decent amount when it was iOS only, but when it became a Mac app I started using it literally an order of magnitude more. My past drafts stay synced via iCloud so it doesn’t matter which device I drafted something on; I know I can find it in Drafts.

Drafts is the starting point for almost everything I write (including this very post you’re reading). Slack messages, comments on GitHub issues, long, thought-out replies to racist Facebook posts my relatives post, you name it.

And while Drafts isn’t meant to be a final resting place for documents or notes, it does serve its purpose as a digital version of a pocket notebook for me, but with powerful search. I often find myself searching my Drafts database as a means of combing through my mind over the past months. Because I’m in the habit of drafting almost everything in Drafts, my Drafts history basically has a copy of just about all of my writing, which is handy for digging through past correspondence and just generally getting a glimpse into my past state of mind.

The most annoying limitation I have run into so far is that it deals in plain text and plain text only. That’s perfectly reasonable (and I honestly think Drafts would be a worse app if it tried to do more), but sometimes I’ll be drafting something that I want to contain images too, and I’ll have to either draft it in Bear, or use Markdown image links in Drafts.