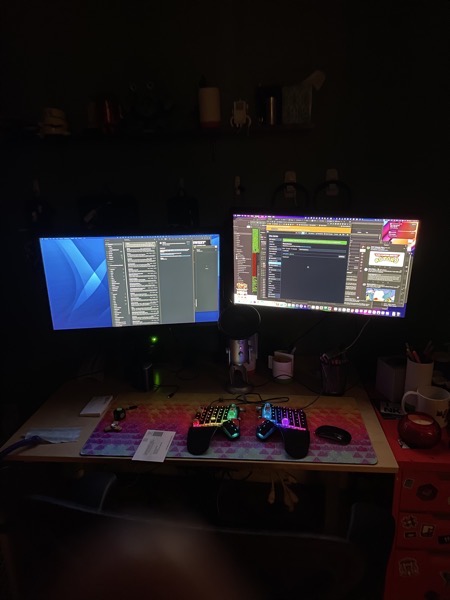 I know what you’re thinking here: “Aaron, if you went whole hog on the tower, why didn’t you complete the set by buying the XDR displays to go with it?”

And I am not going to lie, I was severely tempted to get one or two of these, for a wallet-busting five grand apiece. But I remain confident that in a couple of years Apple will make non-XDR versions of those displays for a much more affordable price (and I’ll laugh to myself about how Apple has reprogrammed how I think about display pricing from ten years ago when I thought the $1000 Cinema display was absurdly expensive, to today when I think of a hypothetical $1900 display as a mass-market product). In the meantime, these 5K displays are great. Having two of them sitting in front of me makes working feel truly immersive.

And price-wise, here’s the kicker: an LG Ultrafine 5K display costs just marginally more than just the stand for an XDR display. That’s correct; the stand for a Pro Display XDR is a grand.

5K displays never really caught on. The vast, vast majority of monitors you can buy are either 1080p or 4K monitors. But from the first time I saw an iPhone 4’s screen in the flesh and noticed how beautifully detailed the Safari icon was, I have been in love with Retina-resolution displays (HiDPI in PC parlance).

Lest you think retina resolution is an extravagance only really needed by graphic designers and such, let me remind you that I basically am looking at text on a screen for a living. It is totally worth the extra resolution to make those letters look so smooth and crisp that my retinas can’t even see the individual pixels.

But in the computer display market today you can have something that has high pixel density, or is large, but you can’t usually have both. A 34" widescreen monitor sounds like a dream until you learn that it’s basically the resolution of a 4K display.

These LG displays are called “Ultrafine”, and I suppose that’s true if by “fine” you mean something like “the same fast food place for dinner again? Yeah, that’s fine” as opposed to “damn, that display is looking fine”. These are the exact same panels you will find in the 17" iMacs, but LG is a little less discerning about which panels meet their standards, so these monitors can have uneven backlighting. The displays have a pretty minimalist, understated look to them, but as soon as you feel it with your hands you know it’s not a premium product; all the money went into giving you a decent panel.

I’m optimistic that Apple shares my nonplussed attitude toward these LG displays and that they’re planning to make a few more displays of their own again for people like me, who want a nice display, but don’t need the level of color accuracy precision that the XDR displays offer. And I’m hoping that when Apple does this, they start offering the displays in 27“ and 32”, for prices ranging from around $1000 to $2000. And when that day comes, that would probably be a great time to try to buy my LG monitors off me for cheap.