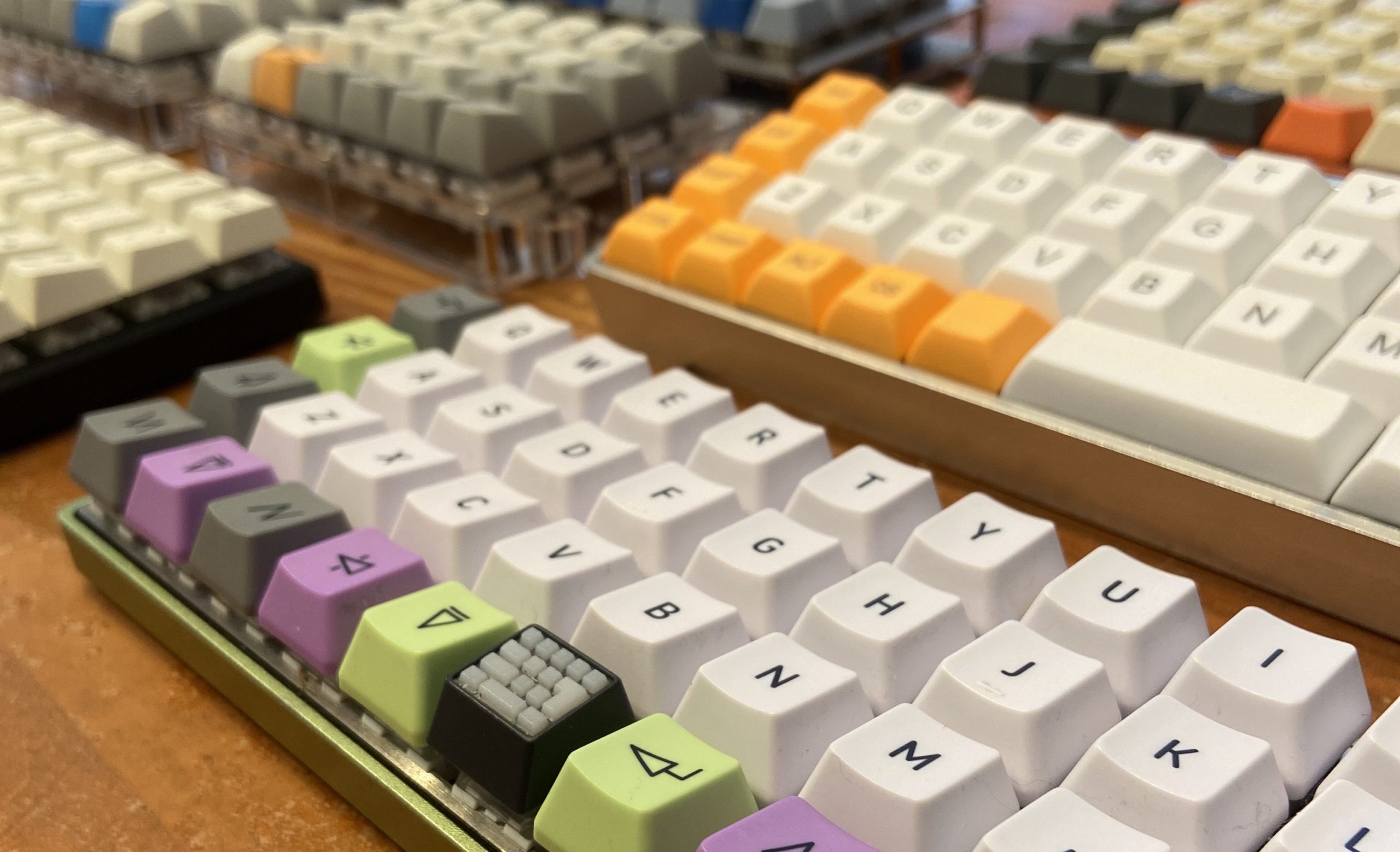 If you know me you know my collection of clicky keyboards has been steadily growing since I bought my first one in April of 2012 (a Das Keyboard, if you were wondering). In recent years, though, I’ve developed an affinity for a specific subgenre of keyboards: keyboards that are 40–50% the keys of a full-sized keyboard that are ortholinear. One of the most popular of these keyboards is the Planck, an absolutely adorable little grid keyboard with a 4×12 arrangement of keys.

When I’m recommending a mechanical keyboard for a friend who is relatively new to the game, I don’t want to throw someone into the deep end with a keyboard that also comes with such a dramatic learning curve; typically I aim to provide a soft landing in the mechanical keyboard world with a pretty standard looking full-size or tenkeyless keyboard that is laid out pretty much like a keyboard your computer might come with. That way, I give them a fair shake at getting to love the much better feel of the mechanical key switches without a ton of frustration at having to re-learn how to type.

But lately I’ve been inclined to push people more toward something like the Planck as their first clicky keyboard.

Just look at it: 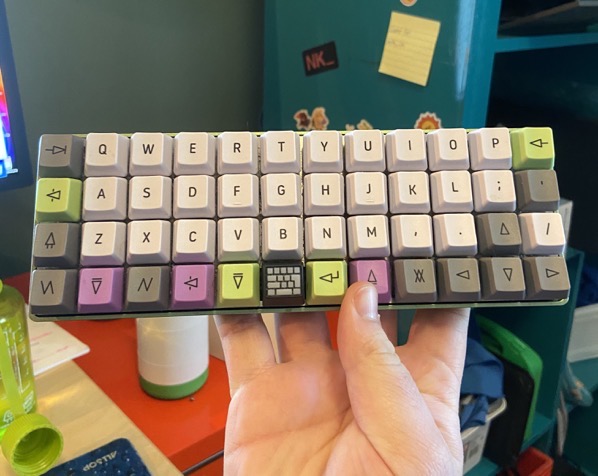 It’s cute! It’s just 47 or 48 keys (depending on whether you opt for a double-wide spacebar). That’s super approachable, especially compared to something like the Ergodox, which is full of these clusters of keys of different sizes: 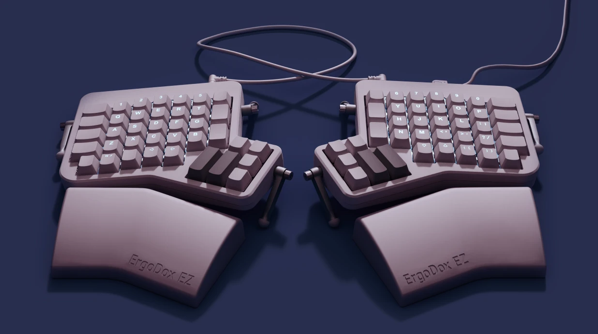 When you first lay your hands on a Planck you’re going to quickly feel like you have a grip on the keyboard; in the top three rows every single key is can be reached by moving a finger no more than one position from home row. And instead of being overwhelmed, you’re actually likely to be asking “Hey, where are all the keys? Don’t I need more?”

And you don’t! The Planck’s clever firmware makes fantastic use of limited keys by making each key do more. Modifier keys like Shift and CTRL can be dual-purpose; for instance, when I tap my CTRL key quickly, it’s treated as an Escape key, but when I hold it, it’s a Ctrl key.

And, of course, there are the layers. So, while you’ll notice there is now row of number keys, they’re actually right there, in the top row, on a different layer. You hold the key to the right of the spacebar to access this layer:

When you factor in how easy it is to reach each key, you’ll find it actually feels quicker pressing 2 keys to press a number than it would have felt to reach up 2 rows to get to that number row. And because the keys are in a perfect grid, your fingers will love how easy and unambiguous it is which key is which! How often do you hesitate for a split second while you try to guess by feel whether you’re hitting the 2 or the 3 key in a staggered layout? With a grid, it’s never in question!

Your Planck will typically come pre-configured with a standard layout that works quite nicely, but you aren’t forced to live with that. The Planck is a fully programmable keyboard. That means its layout can be changed at the firmware level (which also means you don’t need to install special software or hacks on your computer to customize your keyboard’s layout, and you can plug your keyboard into any computer and it works just as you expect). This is my base layer’s layout (I’m a sucker for arrow keys in an inverted-T layout):

My first keyboard in this category was a Preonic, which is like a Planck but with an extra row of number keys on top. I thought the extra row would make for a smoother transition, but eventually I realized the layers were plenty powerful and the extra row was an unnecessary crutch, and I rarely am using my Preonic anymore.

As a programmer, I’ve found that if I try to dive face first into a new type of keyboard at work, I will get frustrated really quickly. Instead, I spend time becoming proficient in more conversational typing first. I’ll type text conversations with people on it, or write up some blog posts with mostly prose and not a ton of special characters. Then, when I become proficient, I’ll try to gradually introduce more typing that involves the other characters.

If you choose a Planck EZ, they offer a graphical online layout configurator that also has a training mode, allowing you to see your layout in real time as you are holding different layer keys. I haven’t tried this yet myself (it was added after I was already pretty good with the keyboard) but I really like the idea of this.

And speaking of layout configuration, as you are learning the keyboard’s layout, I encourage you to make layout changes early and often! If you keep mistaking one key for a different one, why not just change the layout so that it matches your expectations? Are you finding that you keep hitting the Enter key in inopportune situations? Move it somewhere else or put it behind a layer to avoid accidentally sending a message prematurely!

If you haven’t already gotten the hint, Plancks love being customized! After all, the whole keyboard design is open-source from the start, so it was made to be tinkered with; it’s not a black box you’re expected to enjoy as-is. Two popular Planck versions (Drop.com’s and the Planck EZ) have circuit boards where you don’t have to solder the key switches on, meaning you can try out different kinds of key switches to your heart’s content.

Since it’s such a small keyboard, you only have to buy 48 switches to have a full keyboard’s worth, making it cheap to try new kinds out! For the same reason, Plancks also make a great kit (the drop.com version is a kit, for instance). Even if you buy a version that needs soldering, soldering a Planck together is not nearly the undertaking that a full-sized keyboard is).

And, of course, you get to enter the world of customizable key caps! Most custom keycap sets offer a variant to make them compatible with the Planck (look for the “ortho” key set). For the most part it’s not too hard to just take some existing key caps from an existing keyboard and put them on your Planck, but for the bottom row you’ll have to get a little creative since most standard keyboards’ bottom rows don’t have 11–12 single width key caps.

A keyboard that is truly yours

Philosophically the Planck warms my heart. The Planck is a community-designed keyboard, and it is open to its core. When you buy one, you aren’t buying from a big, faceless corporation; you are buying from a cottage industry of small keyboard makers. Hell, you don’t even have to buy one from someone else if you don’t want to; you could build one yourself by hand and hand wire it if you wanted.

The keyboard will give you years of service, but it’s also a simple enough product that it is highly repairable. If an individual key switch stops working, you can replace just that switch. If a component on the circuit board fails, you could replace just that, or have a friend with some know-how replace it. It’s a refreshing departure from so many of today’s electronics.

And most importantly, you aren’t stuck choosing an inferior product just to get something built with these values; the Planck is objectively a better keyboard because of its openness, not in spite of it.

A keyboard for all

The Planck’s birth may have been among some passionate keyboard enthusiasts, but I firmly believe that it’s a keyboard suitable for the mass market. As friendly as the keyboard is to being customized and endlessly tinkered with, it’ll serve you just as well if you set it up just the way you like it and never change anything again.

The keyboard is a very intimate part of the computer. It is the most tactile part of it, and it’s the part of the computer you use when you want to precisely express your thoughts. It’s a peripheral that’s essential to people who work at a computer for a living, and if you’re like most computer users you’re just using the one that came with your computer without giving it a second thought. Believe me, it’s worth exploring better options, and a great keyboard is a solid quality of life improvement!

One response to “Walk the Planck”